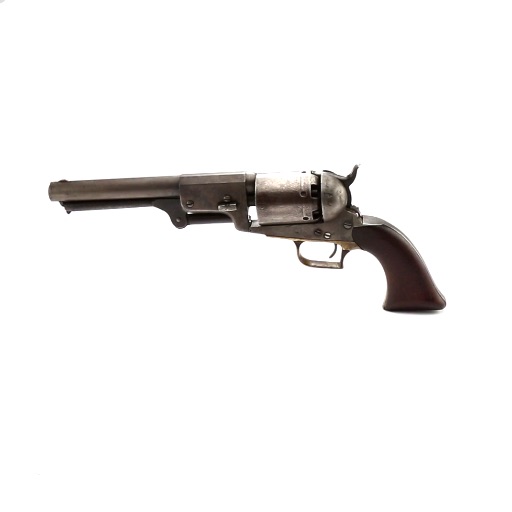 The revolver, case, and accessories have been examined by noted gun specialists Herb Glass and Dan Cullity. They state:

"We have examined the Cased Colt Presentation Whitneyville Hartford Transition Dragoon Revolver serial number 1166 inscribed, 'Col. John C. Hays Presented By Samuel Colt'. Our review consisted of complete disassembly and careful inspection of all parts and accessories. As a result of this investigation we find this set to be completely original throughout, the gun having seen much use with expected period repairs.

Our examination specifically included close magnified review and macro photography of the engraved script presentation to Col. John C. Hays on the revolver's backstrap and case lid. We conclude with absolute certainty that the inscriptions were cut by the same artisan and are authentic, original and untouched in all respects.

Condition:
The revolver has seen much use. About 50% cylinder scene is retained with its 'pressure ridge' overlapping the cylinder stops as is usual in the Transition Dragoon. The cylinder serial number is distinct and clear as are all other external serial numbers. The original loading lever (with replaced latch) is numbered '144' as is the barrel under it. The fine conditioned grips are assembly numbered '10', as is the trigger guard grip strap beneath the grip. The barrel address is clear and distinct with just the 'A' in address incomplete. The 'Colts Patent US' stamping on the frame left is likewise clear and distinct.

Metal surfaces and edges are generally very good, with steel parts a grey brown patina, no significant pitting, and reflecting the use this gun has seen. There is an interesting forging flaw on the frame left recoil shield. The brass trigger guard retains good traces of its original silver plate along with the signs of much use. Mechanics and functioning of the revolver are very good; however there are some minor replacements and repairs that must be noted.

The cylinder pin and barrel wedge are period replacements as are the mainspring and the trigger/bolt spring. There are small period repairs at the barrel breech frame pin holes and at the rear of the barrel wedge slot. Replaced screws include the wedge, loading lever attachment, forward trigger guard, trigger and hammer screws. The loading lever, hammer and trigger screws show attempts at removal resulting in some enlargement of the screw holes at the threaded end. Likewise there is evidence of heat around the loading lever screw - apparently also an attempt to remove it. The trigger screw tip is broken off.

The case is untouched and fine; there are no repairs in evidence. This is the only known Transition Dragoon casing and unsurprisingly, has some unique characteristics. The casing is constructed of mahogany with dovetailed corners and glazed with a faux rosewood finish. This surface texture was a common technique in the nineteenth century and was used to simulate expensive rosewood veneer on all types of furniture objects. The interior of the partition casing is lined with a faded red fabric similar to later Colt casings and perfectly fitted to the revolver and accessories with no signs of alteration.

Most importantly, the silver plaque bearing the inscription 'Col John C. Hays/Texas/ December 1847' is embedded in untouched estate condition in the lid.

All accessories are fine and untouched. The very fine Civilian Walker flask was originally silver plated and retains over 90% of this finish, somewhat tarnished, with no significant dings or defects. The two cavity brass Walker- Transition Dragoon mould is likewise fine with evidence of use. The Walker combination tool is fine with good traces of original blue. The interesting contained oiler is apparently of American origin rather than English and a cap tin, capper and key complete the set.

It should be pointed out that author Robin Rapley pictured and used this set in both editions of his Colt Accoutrements book. As the only original casing of the Whitneyville Hartford Transition Dragoon known to exist, its value to his research in identifying the proper accessories for this model is obvious.

Certainly there were others; most obvious is serial number 1337 presented by Colt to Major Ben McCulloch on January 1, 1848. Also serial number 1331, presented to Senator Edward A. Hannegan of Indiana, is considered a factory applied inscription and would have been cased with accessories.

Of interest, the McCulloch Transition Dragoon inscription shares several similarities with Hays's Dragoon, notably, in the use of allegories above the inscriptions. McCulloch's has the word 'Free' and a cactus representing Mexico. Hays's has 'Texas' with the five-point star representing Texian independence. Hays' gun was presented in December and McCulloch's in January.

The Cased Whitneyville-Hartford Transition Dragoon of Col. Hays is remarkably rare in the arms collecting world for a number of reasons.

This set is a paradigm of study for the Transition Dragoon, as it is the only known example to have survived singularly complete and with extraordinary historical associations.

It is the earliest known engraved Sam Colt presentation.

Colt manufactured and assembled the shorter, lighter Transition Dragoons in Hartford. In December of 1847, Colt presented one of the first guns produced, number 1166, cased and inscribed to Col. Hays, who likely carried it in the Mexican American War and in California as sheriff of San Francisco County.

We believe the Col. John C. Hays cased Transition Dragoon to be the most significant, historical, Texan-American arm to ever be offered to the public."