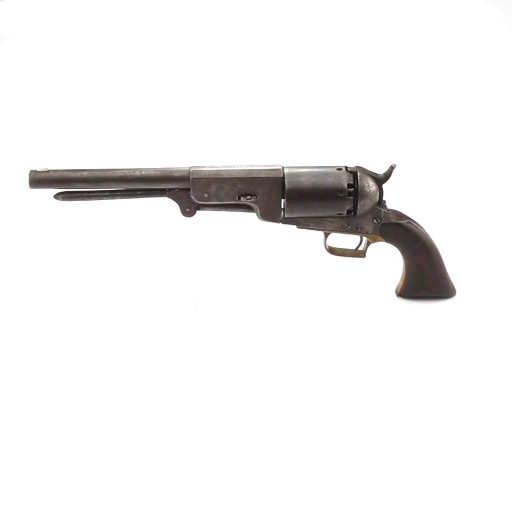 Approximately 100 manufactured by Colt in 1847, with this particular revolver being the first in the serial range of 1001 to 1100.

The revolver and accessories have been examined by gun specialists Herb Glass and Dan Cullity, who conclude that the revolver is an original Colt Walker. Glass and Cullity note the following in their letter:

"... we find this gun to be an original Colt Walker that has seen much use and a period of neglect with subsequent cleaning long ago, but that retains generally very good condition overall. The revolver has seen some of the usual Walker repairs, most done during its period of use. The frame to barrel fit has been tightened by filing of the barrel breech and tightening of the wedge slot in the cylinder pin. The muzzle may have been re-crowned, due to minor damage. The cylinder nipples are replacements and the single safety pin is replaced (probably later). Additionally, the (always replaced) loading lever retaining spring is a replacement, held secure by staking.

It is interesting to note the variation in size of the digits "0" and "1" in serial numbers on trigger guard, frame and barrel - this identical variation being found on the pair of civilian Walkers (1009 and 1010) attributed to Captain Samuel Walker.

Although there is no cylinder scene retained, the sequential serial number on the cylinder rear is clear and distinct (early Civilian Walkers were not numbered on the cylinder outer periphery). The "US 1847" stamping on the barrel lug right is only partially visible but other markings are generally very good. The barrel address is deep, clear and unmarred. The grips are original and in very good condition with normal wear and no repairs. They are numbered internally in the usual place; the number, however, is not readable. The trigger guard grip strap (under the grips) is numbered "B1" in the usual location. The wedge is original and numbered 1001. The obviously original cylinder pin with the aforementioned repair is inexplicably numbered "8". The frame, between the barrel locating pins, is numbered "1001EB".

Interestingly, a key figure known to be associated with the Whitneyville factory, and who had the initials EB, was Eli Blake, the prominent inventor, engineer and manufacturer. Blake, with his brother Philos, ran the Whitneyville Armory for seventeen years after the death of their uncle Eli Whitney. Eli Blake is credited by several sources as having been hired by Samuel Colt to assist with the development and manufacture of the Walker model revolver. Walker number 1001 is the only instance currently known where two initials and a serial number were used to mark a Civilian Walker in this manner. It is possible that Eli Blake inspected and initialed serial number 1001, on the momentous occasion of completing the one thousand Army Contract Walkers.

The mechanics are fine, the hammer screw is an old replacement and the trigger, bolt and loading lever attachment screws have been cleaned up more recently. Steel surfaces are an excellent patina with overall fine pitting caused by the aforementioned improper storage and the brass triggerguard is likewise an excellent, untouched patina.

In conclusion, we find this Walker Revolver - the very first gun of the Civilian series of 100 - to be completely original, (except the very minor parts noted). It has survived with evidence of much use and several of the expected repairs that these guns were subject to, while still retaining very good condition overall.

It must be noted that the research done by Lt. Col. Robert D Whittington III, in his book, The Colt Whitneyville-Walker Pistol, affirms that 'Before any of the 1000 pistols were delivered to the army, Colt sent the first pair of the "civilian" pistols to the man whom Colt considered the best promoter for the weapons. That man had replaced Sam Walker in Colt's esteem and his name was John Coffee Hays, who was then in San Antonio.' Whittington further states, 'It is extremely probable that the serial numbers on Hays' pair of pistols were close to 1001 and 1002...'.